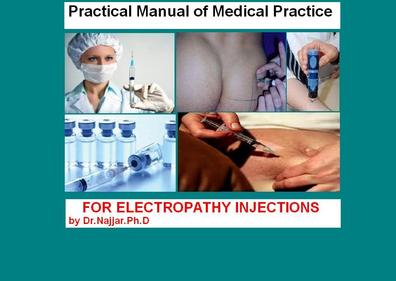 3.Intracytoplasmic sperm injection  (ICSI) a micromanipulation technique used in male factor infertility, with insertion of a spermatocyte directly into an oocyte.

3.Intradermal injection  one made into the dermis or substance of the skin.

4.Intramuscular injection  one made into the substance of a muscle.

5.Intrathecal injection  injection of a substance through the theca of the spinal cord into the subarachnoid space.

6.Intravenous injection  one made into a vein.

7.Jet injection  one made through the intact skin by an extremely fine jet of the solution under high pressure.

8.lactated Ringer's injection  a sterile solution of calcium chloride, potassium chloride, sodium chloride, and sodium lactate in water for injection, given as a fluid and electrolyte replenisher.

9.Ringer's injection  a sterile solution of sodium chloride, potassium chloride, and calcium chloride in water for injection, used as a fluid and electrolyte replenisher.

Jet injection  one made through the intact skin by an extremely fine jet of the solution under high pressure.

lactated Ringer's injection  a sterile solution of calcium chloride, potassium chloride, sodium chloride, and sodium lactate in water for injection, given as a fluid and electrolyte replenisher.

Ringer's injection  a sterile solution of sodium chloride, potassium chloride, and calcium chloride in water for injection, used as a fluid and electrolyte replenisher.

In an intramuscular injection, the medication is delivered directly into a muscle. Many vaccines are administered intramuscularly,  Many other medications.

Many drugs injected intramuscularly are absorbed into the muscle  quickly, while others are more gradual.

Injections to the buttocks are known to reach the bloodstream quickly due to the large amount of muscular tissue and corresponding blood supply.

Generally, intramuscular injections are not self-administered,

but rather by a trained medical professional. However, prescribed self-administered intramuscular injections are becoming more common for patients who require these injections routinely

Certain drugs that are extremely irritating to the skin are injected into the deep subcutaneous tissues by using a variation of the technique. The skin tissue overlying the injection site is grasped with the thumb and forefinger but elevated in a roll, rather than tensed and flattened. The angle of injection may be as great as 90 degrees to the skin. Heparin, insulin, and emetine are injected in this way. If subcutaneous injections are repeated, each is performed at least 5 cm from the previous site. A diagram of a plan for the rotation of injection sites helps to prevent overuse of one area of skin.

A micromanipulation technique used in male factor infertility; a single spermatocyte is inserted into an oocyte by micropuncture.

intradermal injection injection of small amounts of material into the corium or substance of the skin, done in diagnostic procedures and in administration of regional anesthetics, as well as in treatment procedures. In certain allergy tests, the allergen is injected intracutaneously. These injections are given in an area where the skin and hair are sparse, usually on the inner part of the forearm. A 25-gauge needle, about 1 cm long, is usually used and is inserted at a 10- to 15-degree angle to the skin.

injection into the substance of a muscle, usually the muscle of the upper arm, thigh, or buttock. Intramuscular injections are given when the substance is to be absorbed quickly.

They should be given with extreme care, especially in the buttock, because the sciatic nerve may be injured or a large blood vessel may be entered if the injection is not made correctly into the upper, outer quadrant of the buttock. The deltoid muscle at the shoulder is also used, but less commonly than the gluteus muscle of the buttock; care must be taken to insert the needle in the center, 2 cm below the acromion.

Injections into the anterolateral aspect of the thigh are considered the safest because there is less danger of damage to a major blood vessel or nerve. The area permits multiple injections, is more accessible, and is easier to stabilize, particularly in pediatric patients or others who are restless and uncooperative. The vastus lateralis muscle is located by identifying the trochanter and the side of the knee cap and then drawing a visual line between the two. The distance is then divided into thirds and the needle inserted into the area identified as the middle third.

The needle should be long enough to insure that the medication is injected deep into the muscle tissue. The gauge of the needle depends on the viscosity of the fluid being injected. As a general rule, not more than 5 ml is given in an intramuscular injection for an adult. The maximum for an infant is 0.5 ml, and the injection is made into the vastus lateralis muscle. The needle is inserted at a 90-degree angle to the skin. When the gluteus maximus muscle is the site chosen for the injection, the patient should be in a prone position with the toes turned in if possible. This position relaxes the muscle and makes the injection less painful.

Intrathecal injection of a substance through the theca of the spinal cord into the subarachnoid space. Patients receiving intrathecal chemotherapy for metastatic malignancy of the central nervous system should maintain a flat or Trendelenburg position for one hour after treatment to achieve optimum distribution of the drug.

jet injection of a drug in solution through the intact skin by an extremely fine jet of the solution under high pressure.

subcutaneous injection injection made into the subcutaneous tissues. Although usually fluid medications are injected, occasionally solid materials such as steroid hormones may be injected in small, slowly absorbed pellets to prolong their effect. Subcutaneous injections may be given wherever there is subcutaneous tissue, usually in the upper outer arm or thigh. A 25-gauge needle about 2 cm long is usually used, held at a 45-degree angle to the skin, and the amount injected should not exceed 2 ml in an adult. Subcutaneous insulin injections may be given at a 90-degree angle with an insulin syringe. Called also hypodermic injection.

1 a solution administered into a vein through an infusion set that includes a plastic or glass vacuum bottle or bag containing the solution and tubing connecting the bottle to a catheter or a needle in the patient's vein.

2 the process of administering a solution intravenously. Swelling of the limb around and distal to the site of injection may indicate that the tip of the catheter or needle is in the subcutaneous tissue and not in the vein. The fluid may be infiltrating the tissue spaces. It should be withdrawn and the limb elevated. Redness, swelling, heat, and pain around the vein at the site of injection or proximal to it may indicate thrombophlebitis. The infusion should be discontinued and the inflammatory condition treated. The infusion is usually begun again at another site

The transcutaneous puncture of a vein by a sharp rigid stylet or cannula carrying a flexible plastic catheter or by a steel needle attached to a syringe or catheter. It is done to withdraw a specimen of blood, perform a phlebotomy, instill a medication, start an IV infusion, or inject a radiopaque substance for radiologic examination of a part or system of the body. Also spelled venepuncture.

method The specific steps in performing a venipuncture vary with the purpose of the procedure and the equipment to be used, but in most instances it begins as follows: The nurse dons disposable gloves. A convenient vein is selected, usually on the outside of the forearm, on the back of the hand, or in the antecubital fossa. The vein is palpated, and to dilate the vein a tourniquet is wrapped around the arm proximal to the intended site of puncture. After cleansing the intended insertion site, the examiner avoids touching the site with the gloved finger(s). The vein is immobilized by applying traction on the skin around the puncture site. The stylet or needle is held at an angle of 30 degrees for direct venipuncture. In performing direct venipuncture, the tip of the needle is pointed in the direction of the flow of blood and advanced through the skin directly into the vein. The tip is usually inserted bevel side up. However,

if a large-bore needle must be used in a small vein, it is preferable to insert the needle bevel side down because it is less likely to perforate the posterior wall of the vein. After the skin is punctured, little resistance is felt as the tip passes through the subcutaneous tissue, but a sudden slight resistance may be felt as the tip hits the wall of the vein. At this point the tip is cautiously advanced, with the needle or stylet held nearly flush with the skin. Slight upward pressure aids in keeping the tip in the vein as it is advanced into the lumen of the IV space. Blood flows back into the hub of the needle or into the catheter attached to the needle or covering the stylet, and the tip of the needle usually can be felt to be in the vein. If these signs are absent, the tip is not in the vein, in which case it is usually best to remove the needle or stylet, apply pressure to the puncture site, and start the procedure again, using new equipment.

interventions Wing-tipped "butterfly" needles, various kinds of intracatheters, and single or multiple venipuncture needles require familiarity and practice for correct insertion and stabilization. A sterile dressing and an antimicrobial ointment are applied over the insertion site. The cleansing agent used to prepare the injection site may be iodine, povidone-iodine, or ethyl alcohol. If an iodine preparation or solution is to be used, the patient is first asked about any previous allergic reaction to iodine. To aid insertion of the tip into the vein, the patient may be asked to clench the fist to further dilate the vein. The use of the gloves helps to protect the health care worker from inadvertent contact with the patient's blood.

intravenous infusion administration of fluids into a vein by means of a steel needle or plastic catheter. This method of fluid replacement is used most often to maintain fluid and electrolyte balance, or to correct fluid volume deficits after excessive loss of body fluids, in patients unable to take sufficient volumes orally. An additional use is for prolonged nutritional support of patients with gastrointestinal dysfunction (total parenteral nutrition).

Manufacturers' instructions must be followed for preparation and administration of all such medications. The fluid to be infused and the flow rate are by prescription. With intravenous infusions of medication, the danger of drug incompatibility is very real. Incompatibility charts are not entirely reliable as sources of information about chemical interaction of drug additives combined in an intravenous infusion. For this reason admixing should be done by a clinical pharmacologist. Intravenous antibiotics should be mixed only with electrolytes. Because of their local irritating effects on the vein, doses of potassium chloride and dextrose solutions with a concentration higher than 10 per cent should not be given through a peripheral vein. Unless otherwise directed by the